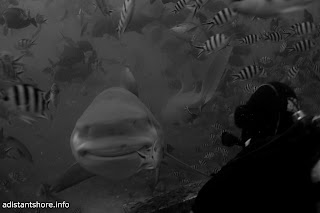 One of the well known legends in Fiji involves Dakuwaqam,  the guardian of the reef entrance of the islands, who often took the form of a shark. Dakuwaqam ,while in shark form, got caught by an octopus at the reef off Kadavu island. Unable to escape, he made a bargain with the octopus. If he was freed he would never harm any people from Kadavu in the waters around Fiji.

So that explained the fearlessness of the Fijians during the shark feeding – but nowhere could I find any reference to Dakuwaqam extending his generous offer to overweight middle-aged anglo-saxons.

Beqa lagoon, where the shark diving happens, is a beautiful place. The beaches are long and unspoilt. On Sundays they fill with families enjoying the warm water, swimming and picnicking. The lagoon is home to some beautiful coral dives, with names like Fantasea, Million Dollar Point and Seven Sisters. But many divers come for just one site, Shark Feed.

This was my first dive with large sharks. I’d seen the dive on a documentary, and was keen to see a large tiger shark. On the flip side, I was probably more keen to come back with all my limbs. Getting on the boat it was calming to see how relaxed everyone was. Once the site is reached, the first thing to happen is the lowering of large bins that contain fish parts to be fed to the sharks. Then the designated shark feeder, who I saw had all his hands and fingers intact, heads down with his team. And then the customers hit the water. Once in the water, due to the 30m visibility, I could look down and see that at the bottom there were already plenty of fish.

We headed down and lined up about five metres from the shark feeder and the bins. The water was full of fish, including black tips and nurse sharks. Right next to me, a moray eel came out and was given a fish head by the guide next to me.

The first thing I noticed was the number of bull sharks. I’d done plenty of coral dives in Beqa lagoon and had seen plenty of black tip and white tip reef sharks, but this was the first time I’d seen any bulls. The other thing was that they were big and assertive. The guide who I’d gotten to know over the week doing coral dives signalled for me to come a bit forward so that I was inline with the bull sharks feeding runs. The picture in this article is taken just after that. It shows the moment just after the bull shark has been fed with a fish head, hence the big smile. It is also the last picture for the day as my camera stopped working shortly after. Each bull shark would take turns, swim quickly into the feeder who would stuff a fish into their mouth, after which they’d turn and head off.

After some time and many bull shark runs, the guide turned to me and did three downward lines in the water. Now I hadn’t seen a signal like that before, but knew it meant a tiger shark was coming in. These dives don’t guarantee seeing a tiger shark, and they make it clear you may not, so I felt very fortunate. In the distance I could see the tiger coming in. What fascinated me was the contrast with the bull sharks. The tiger had a sort of calm confidence. When it came in the bull sharks moved away. It slowly and calmly swam up to one of the guides near the feeder. He pushed it by its snout over to the feeder who placed a fish in its mouth. It turned and did a long slow arc. Its slow deliberate actions reminded me of a whale shark. It was very different from the bull shark behaviour.

Unfortunately, that was it, One of the divers was getting low on air so we headed off to the side before heading up for our safety stop.

Feeding sharks for the entertainment of people like me is a controversial topic. Some say it associates people with food and makes the sharks dangerous. I’ve been unable to find any studies that support this, and given my coral dives at Beqa lagoon without encountering any bull or tiger sharks, anecdotally this doesn’t seem to be the case.

Another criticism is that it sets up an artificial dependency with people. Again, given large periods of time when the tiger sharks disappear I can’t see that this is a long term dependency and again, haven’t seen any studies that support this view. This article outlines some pros and cons, does mention potential dependency and safety issues, but particularly in the issue of increasing the risk to humans is unsubstantiated.

Update: This study indicates that there is no dependency created and that there is no evidence that shark feeding alters shark behaviours –  Does Ecotourism in the Bahamas affect Tiger Shark Movement and Behavior?

What I have seen is that it demystifies and de-demonizes sharks. Also, the Fijians recognise the importance of keeping Beqa lagoon in a pristine state, so that divers and snorkelers will continue to come. Every diver contributes money that goes to local villages and contributes to the management of these sites….

All the images and text on this web site are protected by international copyright law.

No image or text from this web site is to be copied or reproduced without prior written consent.

Pros and Cons of Shark Feeding

Does Ecotourism in the Bahamas affect Tiger Shark Movement and Behavior?

Popular posts from this blog Three years ago I was diving solo at Bare Island in Sydney. (As an aside, I like how we name things in Australia. If you want to go skiing you go to the snowy mountains. Flathead fish have a particularly flat head. And Bare Island is pretty bare. Although it does make me think twice before going for a dive at shark point.). It was an overcast day with only a little bit of swell, a perfect day for a dive to take a few pictures. My plan was to dive the west side of Bare Island. On the west side you can see pygmy pipe fish, sea horses, port jackson sharks (depending on the time of year), lots of nudibranchs, red indian fish, and anglerfish. Twenty minutes into the dive I was nearing the first cave as shown in Marco Bordieri’s map below when I spotted two  black leatherjackets . The two leather jackets were dancing together in the water column, heads pointing to the surface, tails pointing to the sand. Twisting around each other, moving slowly up towards the surface, and then slowly down
Read more 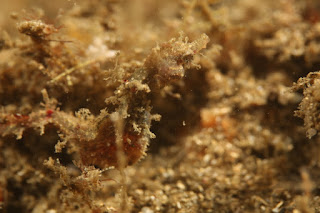 So, you’re living in a big city, what are the chances of you discovering a new species? If you know where to look…well, you’d be surprised. No need to organise that trip to a remote valley in the New Guinea highlands. This story is about a new species found in a city of 5 million people in 1997. To remain undiscovered for so long it had a few things going for it. It is small. Pygmy is an understatement. It is really well camouflaged. It blends into its environment superbly. It lives underwater. And as I said before it is really small…. Its scientific name is Idiotropiscis lumnitzeri, also known as Sydney’s pygmy pipefish. Lumnitzeri comes from the person who discovered it, Akos Lumnitzer, who came across it in October 1997 while scuba diving. The largest specimen measured so far was 55mm – apart from measuring it was also checked for steroid use as 55mm is big for a pygmy pipefish. Sydney Harbour and Botany Bay (another bay in Sydney) are hotspots for seahorses and pipefish, with 19
Read more